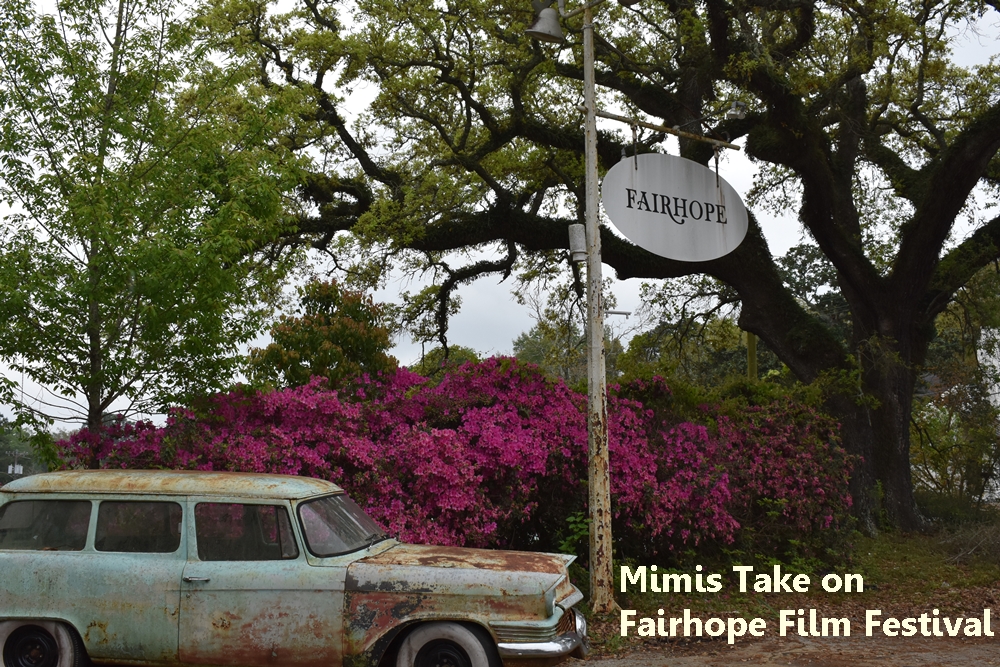 Clearly I adore our quaint little town and all that surrounds it. What’s not to love? Small, fairly quiet, located near the water, filled with lovely people, cool spots and everything needed within your grasp. The icing on the cake is the strong arts community and all its varied branches. One branch that deserves a look,  Mimi’s Take on Fairhope Film Festival.

Where is the Film Festival?

What? A film festival in Fairhope? Yes, if you have hidden under a rock, we have a film festival. I am still amazed at the number of people who are unaware or have failed to attend.  Have you experienced the Fairhope Film Festival yet? Make a date with your heart-throb or girlfriends and try something new.

Even though I’m eager to try new things I had never attended one before either.  Not that I was opposed to the idea it just never seemed within my geographical  reach. Sundance or Cannes is so far away. Truly, I didn’t know what to expect. When I attended several years ago, I thought it was very cool to have instant access to so many quality films in our backyard.

Every year I increased the number of films that I would attend. How lucky for anyone on the Gulf Coast to have such a cool event happen so close to home. Mary Riser and team have worked very hard each year to make this an exceptional event. While viewing the films I discovered a quote on their website, it really hits home with how I feel.

Where do I sign up for Fairhope Film Festival?

Festival starts next week November 14-17, 2019. Website provides all you need to discover four days filled with films, panel discussions, and shorts in six different venues. Several films focus on my favorite subject, food and cooking. Films covering all sorts of subjects so many in fact that it will be hard to narrow your choices down.

Tickets will be sold in a variety of options. Each film is only shown once. Buy a 6 pack pass or All Access Pass and you will enjoy the show. To extend your pleasure buy a ticket and join the street party at the Red Carpet Block Party.

Mimi’s Take on Fairhope Film Festival? Buy your tickets and don’t miss out on all the fun. If you need more suggestions, visit Six Tips to Navigate Film Festival. While you’re in town for the festival be on the lookout for who else might be visiting to see their films on the silver screen.

I have a love affair with food, entertaining, travel and music. www.diningwithmimi.com is a vehicle for me to share my journey of food, travel and music. Traveling allows exposure to all types of foods and flavors. I have learned to cook by being hungry, curious and willing to fail. Food is another form of art and creative expression. Join me on my journey. Copyright 2016-2019 by Mimi View all posts by Mimi

This site uses Akismet to reduce spam. Learn how your comment data is processed.

Privacy Statement located in Menu under Reality Page. © Copyright Dining With Mimi , 2016-2020 Unauthorized use and/or duplication of this material without express and written permission from this site’s author and/or owner is strictly prohibited. Excerpts and links may be used, provided that full and clear credit is given to Mimi Woodham Dining With Mimi with appropriate and specific direction to the original content. Copyright 2016-2020

Hello, Thank you for visiting. Please subscribe below to get the latest updates.

Thanks for stopping by the site. Visit the Q and A Page!

What kind of recipes would you like to see on the site? Leave a suggestion for me to add in the upcoming months.

Do you have questions related to entertaining or cooking? Look for the Q and A page and fire away.

Post the question and I will answer within 24-48 hours depending on the complexity.

Disclaimer: I will answer based on my experience and research materials available to me.

© Copyright Dining With Mimi , 2020-2016 Unauthorized use and/or duplication of this material without express and written permission from this site’s author and/or owner is strictly prohibited. Excerpts and links may be used, provided that full and clear credit is given to Mimi Woodham Dining With Mimi with appropriate and specific direction to the original content. Copyright 2016-2020