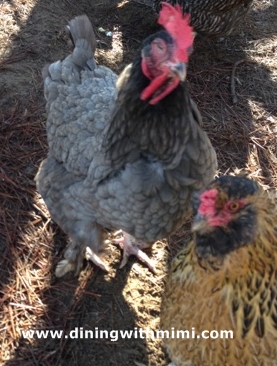 I grew up in the city and happy to call myself a city-girl.  I never lived on a farm or had farm animals. I never ever in a million years would have imagined caring for chickens. I love to cook. After driving past a “Chicks for Sale” sign one too many times, I decided that I wanted farm fresh eggs. 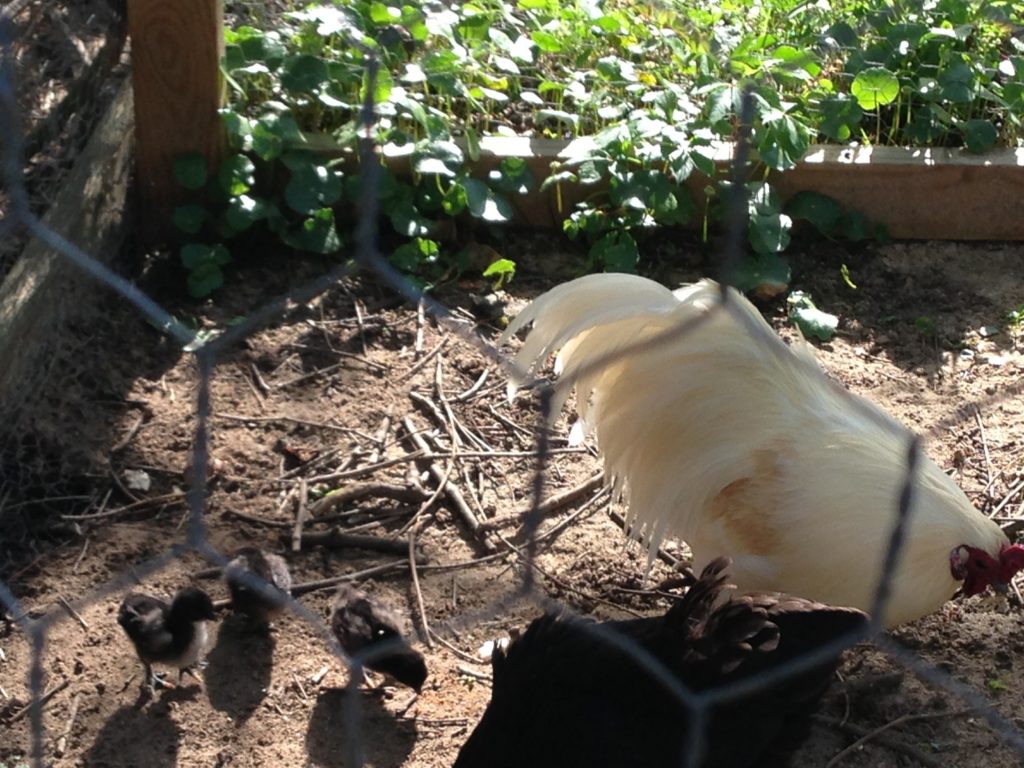 My husband was not on board with the idea. It took a fair amount of negotiating on my part. I believe that my husband figured out that it was going to take a fair amount of effort on his part, before, during and after. He was right. We started with 6 and now have about 20. They live with us on five acres in their Chicken Condo and Chicken Penthouse.

In the time that we have had them, it has been educational learning about the chickens. My husband and I are not farmers.  It has been “learn as you go” process for us and the chickens. Somehow, we have all survived, well mostly all.

In my chicken condo we have a fancy French Copper Maran Hen named Frenchie. The rooster was a Cochin named Sterling. He was my gentlemen rooster. Frenchie and Sterling had a mad love affair.

Frenchie has been a snooty hen from the beginning. When you would approach Frenchie  on the nest box to collect eggs, she would do a Linda Blair spin and squawk at you. Her squawk said “Don’t even think about it”. This was typically enough of a warning for me to come back later.

Over time, we adjusted to the “chicken lessons” that we needed to learn. The chicks all seemed to manage despite our lack of Chicken MD or PHD. The chickens had everything that they needed:

I think over time Frenchie decided that she didn’t want the other hens to raise chicks. Frenchie started pecking and breaking eggs. This is certainly not good manners in a chicken coop, let alone a Condo. It took us a while to figure out that she was the culprit.

Remember, I said that we are not farmers.

Frenchie downsized from the condo to a portable dog kennel in the yard.  I was out shopping with a friend, and received a disturbing phone call. Frenchie had been attacked. We raced to the house. I pulled up and went straight to the kennel. Feathers were everywhere, Frenchie  had an attitude, her neck had a large gaping hole and she was missing a wing.

I looked at my friend Red, who is truly an animal lover.  Red is the perfect person to stand with me in this chicken tragedy. Red volunteers with BARC and has lots of compassion.

BARC is a 501(c)3 non-profit. Established in 1979 as the first and only county-wide animal welfare agency. BARC’s  mission is to cut the number of abused and abandoned pets through spay/neuter, education, rescue and adoption.

Red and I are at a loss. Frenchies’ wounded badly, but she’s still standing. Her neck has a huge slash and she’s missing a wing?  I didn’t have a book that prepared me for this. We discussed among ourselves about what we should do.

My husband was not home. I reached him on the phone and give him the lay of the land. I asked him to call Doctor M for an opinion. A few minutes later I heard the laugh all the way from Arkansas. “I called him” my husband said. I replied, ” What’s the verdict” ? Doctor M said “In Arkansas, Frenchie’s situation wasn’t a problem, it was  lunch.”

Our options were call the vet or get the shotgun.  Red calls her Vet and explains all the gory details. The Vet listened and advised that based on the information  presented that he wasn’t sure that she would survive the surgery.  He also could not quote a price without seeing her. Did I mention that it was Saturday?

The Vet answered all my questions. He was struggling with telling me “Hey lady, it’s a chicken” . To his credit, he did not say that. I hung up the phone and still was at a loss. It didn’t sound like Frenchie was going to survive even with the Vet visit.

Remember, this is a Snotty French Chicken with a behavior problem.

Red and I decided that we would clean Frenchie’s wounds and let nature take it’s course.  How do you pick up a chicken that was attacked and is missing a wing? Gently, very gently.

I picked her up with a towel and wrapped it around her. We cleaned the wounds and put some antibacterial ointment around her gaping neck wound. It didn’t look good for Frenchie. We moved her kennel back inside the chicken coop. This way she would be protected but not able to roam the coop nor would the other chickens peck at her.

Sterling, my French Rooster, laid down beside the kennel and sat there for days to keep her company.

As luck would have it, we were leaving the next day for a business trip. Red agreed that she would come over every other day and attend to Frenchie. I fully expected to get a call everyday saying that she passed and officially had “flown the coop”. When I returned, Frenchie was still alive.

A few days later a major thunderstorm blew thorough our little town. In a big storm a small river flows through my yard. An area holds water and  floods in the corner of the Chicken Condo. Guess which corner we put Frenchie in?

In the dark and pouring rain my husband went to the coop to retrieve Frenchie. Frenchie is now a “mad wet hen” standing in water and close to drowning in the kennel in the coop.

I am sitting on my couch minding my business when I look up and see my husband standing at the back door drenched holding a mad wet hen. I go to the door , look at my husband and the mad wet hen. I don’t really say anything because I am at a loss for words.  My husband says “She’s wet”. I reply “Yes, I see that”. He says “And she’s muddy”.

Just to recap, I have a Snotty French Hen, with gaping hole in her neck,  missing a wing, wet, muddy and has a behavior problem.   I really am at a loss but I get a couple of old towels and antibiotic ointment.  I go to the back door, let my husband and his mad wet hen in the house.

We put her in the sink and oddly enough she stays there. I use the faucet sprayer and rinse the dirt from her as well as possible. My husband stands with his hands above her if she starts to get frisky with her one good wing and attempts to fly. I administer the ointment gently while the mad wet hen watches my every move.

I ask my husband to get the hair dryer. He looks at me puzzled. He says “It’s probably not a good idea to heat up the chicken. ” Again I am puzzled about what to do. I can’t dry her with hair dryer, I can’t put her outside wet, I can’t let her loose in my house. I go to the bar stool and sit.

My husband retrieves her kennel and moves it to the big house on my porch. Frenchie moves into her “Porch Kennel” and settles in. After a couple of days of discussing the entire ordeal of gaping neck wound, missing wing, attempted drowning, I decided she needed meds. She was a survivor and not going down without a fight.

I went to Cecil’s at Old Tyme Feed and Seed. I went to the clerk and asked a couple of questions about chickens and medicine. The clerk had a ton of questions on his own. I had to explain my Snotty French Hen with the behavior problem,  gaping hole and missing wing.

My story was so interesting the clerk had to get help from another gentlemen. Someone else came over and I had to tell my story all over again. I think they were amused. The next thing I knew, I was going home with antibiotics and a syringe. Yep, I was going to learn how to give a Snotty French hen a shot.

I will skip the entire “how to give a mad hen a shot”. You can fill in the blanks, I am sure. While Frenchie was convalescing on the porch at the big house, I noticed that after Sterling cock-a- doodled do every morning Frenchie would make this warbled attempt at something that was an attempt at crowing. Hens don’t crow.

She was talking to her lover, Sterling. I am pretty sure that she was saying “Sterling, I’m at the big house. Lover, come save me. The crazy woman  that moved me from the Chicken Condo to the kennel where I was attacked has now kidnapped me. I am being held hostage on her porch. She keeps torturing me with a scary needle. Help! Hurry!”

My French crowing hen survived her ordeal and is still a great layer. It has been over almost two years since she was attacked. I am happy to report that her neck wound healed on its own and her wing grew back.

That would make a good story! Her wing did not grow back but all her feathers hide it well. It’s only visible when she runs and she may be out of balance. She is alive and well. Frenchie is back in the condo with her other Peeps although I am sure that her pecking order is not what it once was. Frenchie no longer has an egg pecking problem.

Moral to the story: If your Snotty with a bad attitude, you may be relocated and who knows what could happen. Behave and be nice.

I have a love affair with food, entertaining, travel and music. www.diningwithmimi.com is a vehicle for me to share my journey of food, travel and music. Traveling allows exposure to all types of foods and flavors. I have learned to cook by being hungry, curious and willing to fail. Food is another form of art and creative expression. Join me on my journey. Copyright 2016-2019 by Mimi View all posts by Mimi

This site uses Akismet to reduce spam. Learn how your comment data is processed.

Privacy Statement located in Menu under Reality Page. © Copyright Dining With Mimi , 2016-2020 Unauthorized use and/or duplication of this material without express and written permission from this site’s author and/or owner is strictly prohibited. Excerpts and links may be used, provided that full and clear credit is given to Mimi Woodham Dining With Mimi with appropriate and specific direction to the original content. Copyright 2016-2020

Hello, Thank you for visiting. Please subscribe below to get the latest updates.

Thanks for stopping by the site. Visit the Q and A Page!

What kind of recipes would you like to see on the site? Leave a suggestion for me to add in the upcoming months.

Do you have questions related to entertaining or cooking? Look for the Q and A page and fire away.

Post the question and I will answer within 24-48 hours depending on the complexity.

Disclaimer: I will answer based on my experience and research materials available to me.

© Copyright Dining With Mimi , 2020-2016 Unauthorized use and/or duplication of this material without express and written permission from this site’s author and/or owner is strictly prohibited. Excerpts and links may be used, provided that full and clear credit is given to Mimi Woodham Dining With Mimi with appropriate and specific direction to the original content. Copyright 2016-2020